. . . for the open women’s Cross Country Grand Prix, that is!

But let’s back up. Way back on Oct. 9 the HFC Striders hosted the 3rd race of the USATF-NE XC series at the Wayland XC Festival. In a year when most of the region has suffered from drought, Mother Nature served up a deluge for this race. Runners of all ages shrugged off the conditions and enjoyed a classic cross country day on the grass and trails. Ryan O’Connell of SISU was the first USATF finisher, coming in 2nd behind Dan Crowley, a 23-yr-old from Boston. (Get this man on a cross country team!). Kara Haas of GLRR was the 1st USATF finisher on the women’s side and the first masters woman, in 2nd place overall behind unattached Laura Morrison of CT. Arguably the most impressive result of the day was the overall winner of the 3K race in the under-10 crowd, Leilani Gibson from New Haven, who came within 6 seconds of the course record for her age group on an incredibly muddy and slippery day. Full results are posted here.

Two weeks later the grand prix competition moved east to the Mayor’s Cup in Franklin Park, where the weather was calendar-perfect, especially if you ignored the roughly 25 mph winds in your face as you headed by the finish line (which one does, cruelly, multiple times before actually finishing). Good write-ups on the top finishers in both the men’s and women’s championship races can be found here and here. As usual, several USATF-NE teams who do not race the grand prix series came out in force and dominated these races. Laura Paulsen of GBTC was the first USATF-NE finisher and led her team to 2nd place behind the dominant running of the women from Battle Road Track Club. On the men’s side NE Distance dominated as a team with a strong pack behind overall winner Jim Spisak, with BAA edging out the men of Battle Road for 2nd place. The masters competition played out among 300 runners aged 15 and up in the all-comers Franklin Park 5K. Mike Galoob of BAA continued his dominance by finishing first overall; he was finally joined by enough BAA teammates to pull of the 40+ team victory as well, and the BAA men also took first in the 50+ team division. The 60+ men of GLRR won that division. For the women it should not surprise anyone that Kara Haas was the first masters runner; you might also not be surprised that she was the first woman runner overall in this race that contained a fair number of college club runners. But even if you’re not surprised, you should be impressed. WMDP edged out Liberty by 1 point to take the women’s 40+ team title, while Liberty took the 50+ team race more decisively over the Westchester TC. Full results for the Mayor’s Cup are posted here. 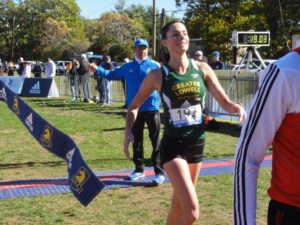 As the title of this post suggests, though, the real story in the USATF-NE Cross Country Grand Prix is the team competition. This coming Sunday the final race of the season, the USATF-NE Championships, will be held at Franklin Park. And on the open women’s side, the top three teams are all tied in the series right now with 13 points apiece. SISU claimed their share of the lead at Mayor’s Cup with the return of Caitlyn Germain, who led a 1-2-3 punch with Sumner Fletcher and Amanda Wright close behind to finish ahead of both WMDP and HFC Striders. This is the first time in recent years (maybe ever?) the HFC women have fielded an open women’s team throughout the series, and they have used strong pack running and some age-defying masters performances from Eileen Cakouros to stay in the hunt for the open series crown. At New England’s this year we return to pre-2015 rules where masters women can score down for the open teams and score for their age group teams, so Sunday’s race should be interesting. Will SISU take their first cross country series title? Which squads have to split their talent to cover the marathon in the road race grand prix? Show up to find out!

While the other team races are not as close–with the exception of the race for 2nd place in the open men’s division, where SISU and HFC are tied for 2nd–there is money on the line BOTH for the series places and for the New England meet itself. In the individual races the tightest series competition looks to be in the Men’s 50+ division, where former XC Chair Jason Cakouros lurks just one point behind Alejandro Heuck, with Jason apparently coming on strong as the season progresses. Online registration for Sunday’s meet is available for all USATF-NE members, and there will be raceday registration as well for the undecided. See you all there!

This entry was posted by Kate Queeney on November 2, 2016 at 4:12 pm, and is filed under Cross Country. Follow any responses to this post through RSS 2.0.Both comments and pings are currently closed.